Strength is one of the most popular components which athletes will look to develop in a performance plan. However, the exact strength qualities they require can be unclear, and researching can lead to further confusion.

This article will aim to classify some of the main strength qualities and present examples for each. The strength quality in which an athlete seeks to develop dictates almost all training variables including frequency, reps, sets, tempo, intensity and even rest.

The peak force that the neuromuscular system is capable of exerting in a single maximal voluntary contraction, irrespective of the time element.
Maximal strength can be further divided into each type of muscular contraction.

In a concentric contraction, the muscle shortens while producing tension. For example, when performing a bicep curl the bicep muscle contracts and shortens to close the angle at the elbow joint and curl the dumbbell towards the body. Concentric strength is an important quality for power development, acceleration & jumping, among many other movements.

In an eccentric contraction the muscle lengthens while producing tension. An example here would be during the bicep curl where the athlete deliberately “brakes” or slowly controls the speed of movement as the dumbbell is lowered away from the body following the concentric curling movement. This is an important strength quality in injury prevention, in safely landing from a jump, and also in the development of agility, deceleration or change of direction speed where the athlete must “apply the brakes” to stop or slow their movement suddenly. Eccentric strength is also of great importance to avoid plateaus in training. Training only concentrically and explosively, as would often be the norm during an in-season phase for competitive athletes, will close the gap between eccentric and concentric strength (known as the strength deficit) and maximise the rate of force development for a set level of strength. However, when this gap becomes minimal, gains in strength and power will be minimal until eccentric strength is prioritised and advanced again.
Typically, the average athlete will be significantly stronger eccentrically than they are concentrically – this is why many individuals can lower themselves relatively easily under control from the top position of a chin-up but may not have the concentric strength to pull themselves back up.

In an isometric contraction the muscles develop tension while their lengths remain unchanged. In this example, if the athlete decided to stop the curling movement when the elbow reached a specific joint angle – say 90 degrees – and hold that position for any period of time, the contraction would become an isometric. During many movements, for example maximal sprinting or change of direction, there is a very short moment between the eccentric and a concentric contraction where there is no movement occurring around the joint, yet the muscles involved are producing tension despite this lack of movement – This is an isometric contraction
Maximal strength is a hugely important quality in sports where resistance must be overcome. For example during acceleration, weightlifting, throwing & jumping. Sports such as football, rugby, tennis or basketball require high levels of maximal strength.

The maximum force an athlete can generate per unit of bodyweight, irrespective of the time element.
This strength quality is hugely important to athletes who must achieve high levels of strength while it is beneficial or required in their sport to maintain a lower bodyweight, for example boxing or gymnastics. The type of training for this quality differs to the training for maximal strength as the aim is to primarily improve muscle fibre recruitment (neural drive), rather than muscle fibre size (hypertrophy).

Similar to maximal strength, absolute strength represents the maximal force an athlete can generate irrespective of the time element, and also irrespective of bodyweight.
Unlike in the examples given above for relative strength, there are some sports where an increase in bodyweight may be an advantage rather than a disadvantage. For example, rugby, American football linemen, or some throwing athletes such as shot-putters, or hammer/discus throwers. These athletes can train using hypertrophy (increasing fibre size) methods to develop strength. Some athletes from other sports may also benefit from some degree of this training.

The ability of the neuromuscular system to produce the greatest amount of force in the shortest possible time frame.
Speed-strength is a key quality in acceleration, sprinting, kicking, throwing and jumping and therefore is a hugely important quality in many sports. This quality can be subdivided into three other qualities: Starting strength, explosive strength and reactive strength.
STARTING STRENGTH
The capacity to generate maximal force at the beginning of a muscular contraction.
Starting strength is important in sports where sudden bursts of speed or power are required. Examples include racket sports where the player must accelerate from a static low “base” position, combat sports (punching) and sprinting (block start).
EXPLOSIVE STRENGTH
The capacity to develop a vertical rise in force once movement has been initiated; the rate at which an athlete can develop peak force.
This quality is especially important in sprinting, and also in high resistance sports such as shot-putting or weightlifting.
REACTIVE STRENGTH
The ability to quickly switch from an eccentric contraction to a concentric contraction, also known as the SSC (stretch shortening cycle).
This quality is primarily trained by plyometrics and maximal sprinting and is a high priority in speed & power based sports. In sprinting, reactive strength is of particular importance at higher speeds where ground contact times must be minimised.

The athletes tolerance to fatigue in strength performances of longer duration.

Examples of sports which require a high level of strength endurance include rowing, swimming, cycling and other sports where a submaximal level of force must be maintained over a prolonged period of time.

Throughout a training plan, an athlete will of course work towards developing many of these strength qualities, prioritising some over others. As previously mentioned, many training variables are influenced by the type of strength quality being developed. Exercise selection, training splits and frequency, exercise components, order, reps, sets, tempo and rest are all dictated by the desired outcome. Of course many of these factors are also determined by an athletes movement capacity, training history and experience.

The following articles in this series will look at how these training variables can be manipulated to achieve a specific strength objective.

END_OF_DOCUMENT_TOKEN_TO_BE_REPLACED 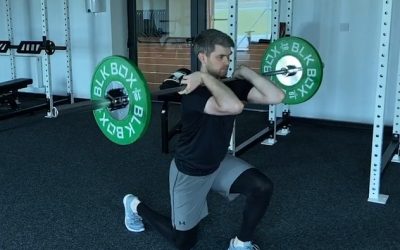 There are many elements to enhancing speed, no one training method holds the key. Rather it is a combination of components that result in greatest improvements. For example, developing specific strength qualities, is one of the most effective ways to increase the power necessary for maximal sprinting. However unless an athlete first focuses on movement, and in turn movement skills, they may struggle to maximise the results from their efforts in other areas.

The purpose of any physical preparation routine should be to optimise performance in the upcoming session or competition, while decreasing the risk of injury.
Traditional warm-ups have typically included light aerobic movement followed by static stretching, and while this approach is successful in raising body temperature, it does not contribute significantly towards reducing injury risk, and certainly not towards optimising performance.

We are at that time of year where a lot of teams are returning to training for the season ahead. Of course, most will have different league and championship calendars and will go about their preparation for each competition in various ways. Some will begin with gym sessions only, some will opt for field sessions only, and some will choose a combination of both. Some may even decide to give their players another few weeks before returning to any form of training.

At AXSOM, we believe that the process of eating should be viewed simply as fuelling the body. In the same way that a high performance car needs clean fuel to perform to the highest level, the body needs clean fuel to be at its most efficient and effective. We fuel to train, fuel to recover, and fuel to compete. This is applicable in all areas of life, not just with regards to competitive athletes. With nutrition, you are not only fueling the body, but the mind too, as food provides energy for our brain as well as our bodies.